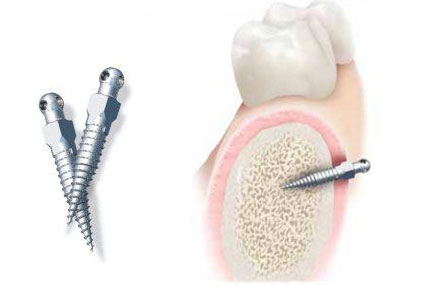 Dental implants have been used for many decades. There have been many different styles of dental implants over the years, but for the sake of simplicity, imagine a dental implant as a structure that resembles a small metal post or screw that is inserted into the bone of the upper or lower jaw. A small portion at the end of the implant can be extended into the mouth so that a prosthetic tooth (crown) can be placed on top of it. Together, the implant and the prosthetic crown can serve to replace a missing tooth and can potentially last a lifetime. The materials used to make a traditional implant are designed to promote osseointegration. This means that the bone that surrounds the implant can fuse to it, creating a permanent complex.

In more recent decades, temporary implants have been developed for various uses. Temporary implants used in conjunction with orthodontic therapy are known as “mini screws”, “mini implants” or TADs. TAD is an acronym that stands for temporary anchorage device. TADs are smaller than traditional implants and they are not designed for osseointegration. The most common use for a TAD is as an anchorage point from which a force can be applied to move a tooth.

To understand how TADs are used in orthodontics, imagine two boats floating on a lake. Each boat represents a tooth that must be moved closer to the other. If a rope is attached to each boat and then reeled in, both boats will move away from their original position and float closer to the other, eventually meeting in the middle of the space that was previously between them. Sometimes this is the ideal way for braces to move two teeth together, but not always. Now imagine the same two boats but in this second scenario, one boat has an anchor that is secured overboard. Now, when the same rope is attached between the boats and reeled shorter, the same distance between the boats will be decreased, but only one of the boats will move. Instead of meeting in the middle, the boats will meet at the anchored boat’s location. A TAD works the same way…it acts like an anchor for teeth being moved with braces. It regulates the way teeth will move in ways that braces alone can’t.

The example just given is only one of many ways in which TADs can be used in orthodontic treatment. Generally speaking, TADs enable the orthodontist to move teeth in ways that were previously impossible. In my practice, I also use TADs as a way to temporarily replace missing teeth during or immediately after orthodontic treatment. For example, many individuals are born without a maxillary lateral incisor (top front tooth). For these patients, the best treatment may be to use braces to create a perfectly sized space where the tooth is missing so that a prosthetic crown and implant can be used for permanent replacement. Unfortunately, some patients may be too young for a traditional permanent implant at the time when their braces are removed. In this situation a TAD can be used to support a “fake” tooth that can serve the patient for a few years until the jaws are done growing. When the patient is old enough for a permanent implant, the TAD and tooth attached to it can be easily removed.

TADs may fracture. In the unlikely event that a TAD breaks, it must be removed. If it breaks in an inaccessible location, referral to an oral surgeon may be indicated. This can potentially result in additional expense for the patient.

The area around a TAD may become infected. In the unlikely event that an infection develops the doctor who placed the TAD should be notified immediately. Antibiotics may be prescribed. Symptoms of infection include (but are not limited to) pain, redness, swelling, foul taste, and fever.

The area around a TAD may exhibit inflammation. Symptoms of inflammation include pain, redness, and swelling.